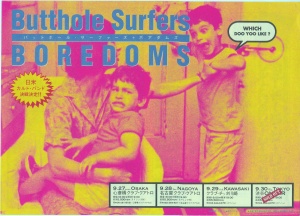 BUTTHOLE SURFERS vs. THE BOREDOMS

I was debating whether to see this show when it was announced because I had heard that after Lollapalooza and the Stone Temple Horseshit tour, the Buttholes had degenerated into some second rate cabaret lounge act. When the Boredoms were added to the show I decided to drop the Yen on tickets.

I bought a bunch of Boredoms stickers while I was on line, but I didn’t have the ¥3000 for a t-shirt. (I should have bought one. It had a really unusual design by Eye and Yoshimi.) The inside of Quattro reminds me of The Roseland in NYC. Ever been there?

I was hanging out by the side of the stage and these two Japanese girls came up to me and asked, “Excuse me, are you King?” King? Who the fuck is that? Sounds like a dog’s name. I realized that I left my drink ticket in my jacket, so I went back to the bag-check lockers or whatever the fuck they’re called. Another girl comes up to me and asks me the same question. Yeah, I’m the King. The King of Rock. There ain’t none higher. Sucker MC’s they call me sire. Strange.

The Boredoms finally take the stage. Eye leaps into the crowd. Grunts. Screams. Sweat. Noize. Scum. Chaos. A typical Boredoms show. Eye and Yoshikawa slam serving trays together. I think that the audience at the Boredoms shows are half the fun. Let’s face it, most people do no appreciate or even try to understand what the Boredoms do. I learned that when I attended the Boredoms show at the New Music Seminar with four or five people. Only one of my friends “got it.” The others put their hands over their ears and run to the back of the club in horror. My friend Mike seriously thought the band was drunk and out of control. Good Grief!

Because the band cannot be easily defined and are not radio and MTV friendly (forgive me for using stupid industry terms), the average “alternative dork,” who digs shit like Pearl Jam and Alice in Chains, is not going to go out of his or her way to see a band like The Boredoms. This is especially true in Japan. Many people make the mistake of assuming that the average Japanese person has heard of bands like Shonen Knife and The Boredoms because they are known overseas. I would say that 99.9% of the people that I know have never heard of the Boredoms. Most young Japanese music fans are into crap like Bon Jovi, and nauseating big hair and lipstick bands such as X Japan and Princess Princess. The majority of the people who listen to “indie” music tend to lean toward pop bands such as the Lemonheads, Jesus Jones or whatever’s trendy at the moment. It’s also fair to assume that a number of people will see a Boredoms show solely because they’ve read the band opened up for Sonic Youth on their last tour, and consider a Japanese band I that position a novelty. But then again, the Boredoms are a novelty and I mean that in the best sense of the word. Bands today have very little idea how to put on a good performance. Even punk and hardcore bands rely on the same tired cliches that would put heavy metal bands to shame. Watching the Boredoms is like watching six different bands at once. Each member of the Boredoms either leads their own band and/or is involved in several of side projects that comprise different musical genres.

Even though Yamatsuka Eye is considered the main vocalist for the Boredoms, that role is constantly challenged onstage, allowing for more interaction between members of the band. Yoshikawa Toyohito is Eye’s alter-ego, doppleganger, sidekick, evil twin, and court jester rolled into one. Just as Public Enemy could not exist without Flavor Flav, The Boredoms would not be The Boredoms without Yoshikawa. Eye has said himself, that in many ways Yoshikawa is The Boredoms. Yoshimi P-we (ds.) narrates the chaos with high pitched screams and blasts of energy from her trumpet. When Yoshimi has had enough of watching the action from behind her drumkit, she’ll join in the melee and take control of the stage. Yamamoto (g.), Hira (b.) and percussionist ATR are the glue that hold the band together, but having seen Hanadensha and Omoide Hatoba live, I can tell you they are capable of exploding at any given moment. All these elements come together to make the Boredoms one of the most exciting live acts in the world.

The Boredoms put on a tremendous show and I start to leave before it hits me that The Butthole Surfers are on next. I need a beer. Good time to use that ¥500 drink ticket.

The Buttholes come on and the crowd goes berserk. People are jumping off tables. I guess a lot of people must have loaded up on isotonic drinks (Pocari Sweat etc.) during the Boredoms set because I can hardly move. I get kicked in the head a couple of times. Somebody needs to teach this crowd Stage Diving and Slam Dancing 101: How to Have a Good Time Without Causing Bodily Harm to Others. Look at me gripe. I must be getting old.

Gibby looks like Jim Morrison during his bearded pot-bellied stage right before he croaked. He’s pretty pissed off for some reason. The little effects doohickey that he uses doesn’t seem to be working properly. He seems as though he had a few cans of Sapporo before the show and he’s guzzling a Budweiser (Brewed in Japan) with a ciggy dangling from his mouth (Keith Richards style.)

The Background film showed someone getting circumcised. It might have had something to do with the theme of the show. I just wonder how they got the damn thing through customs at Narita, because I have friends who have been nabbed for bringing in a copy of Penthouse.

Although the show wobbled along in the beginning, the band got their shit together and showed Osaka how it’s done Texas scumbag style. I got kicked in the head again when a crazy fan dived off the railing during “Jesus Built My Hot Rod.” After the show I realized that King is the name of the drummer. Maybe I do look like him from a distance, in a poorly lit place after a few beers. I guess that I lost my chance to act like a rock god. Oh well, there’s always next year. I bought a pair of Ray-Bans just in case. 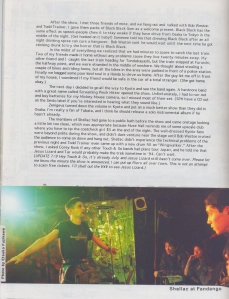