12.30.2017
I took the train from Hanshin Namba (which I had no idea existed until today), towards Amagasaki and changed trains for the Umeda line at Daimotsu.  I got off one stop later at Kuise Station. The entire ride took 20 minutes, much shorter than expected, but I managed to finish reading Suicide Casanova, a very entertaining novel by Arthur Nessian. This was my first time in Kuise and it reminded me a bit of Taisho Station on the Loop Line. I was here to meet JYT, a trilingual photographer and teacher from Montreal who has lived in Japan for sixteen years. He arrived on his bicycle a few minutes later and we set out to explore the nearby Showa Shopping Road. 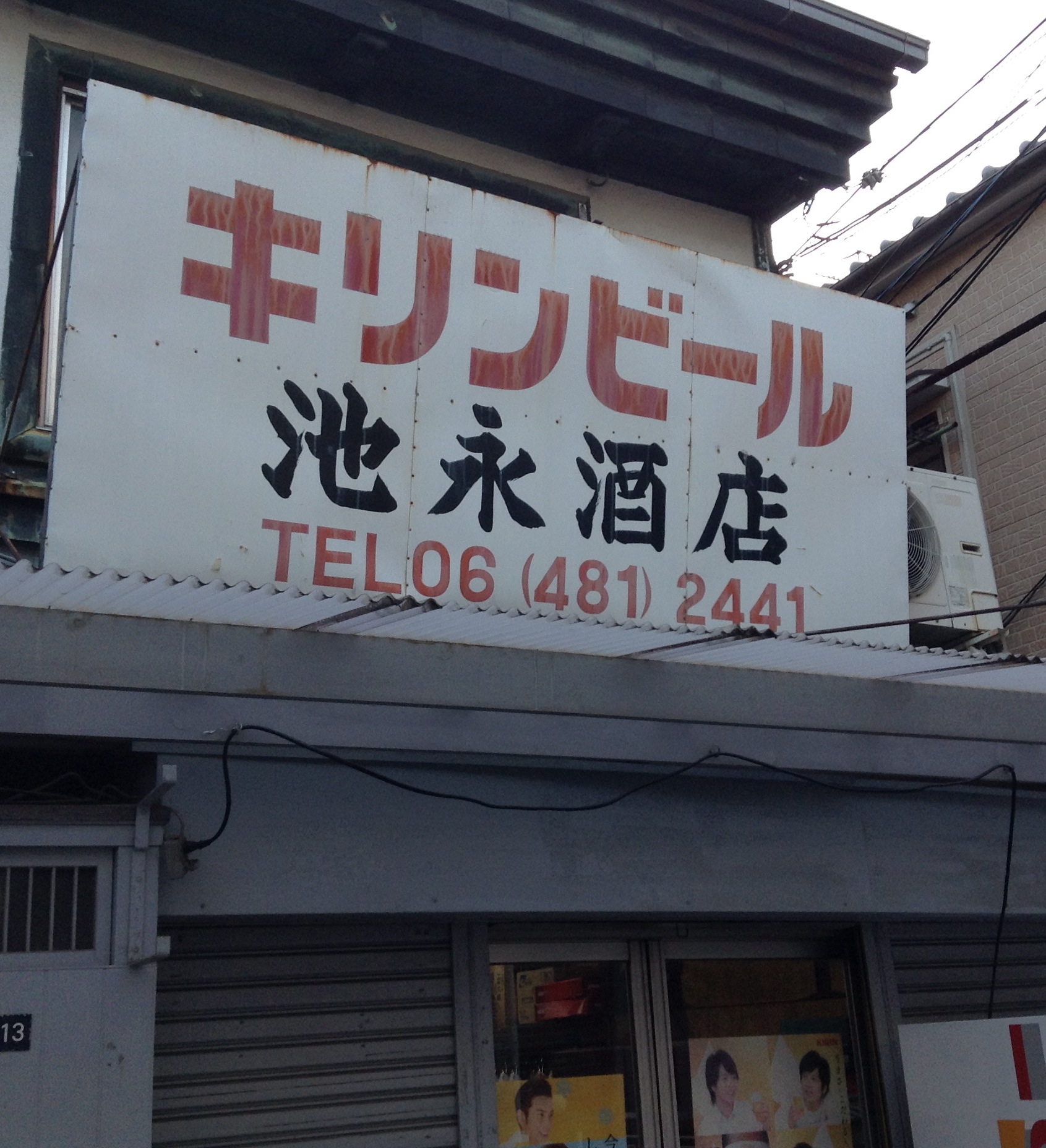 We quickly discovered a kakuuchi called Ikenaga Saketen.  Ike (池) means pond and naga , also read as ei (永) means long time as in eien (永遠) eternal or eiju (永住), permanent residence. The proprietress was a very nice lady who didn’t seem surprised to see two foreigners walk through the door. We ordered a daibin of Sapporo beer and a couple of cans yakitori since Ikenaga doesn’t carry much in the way of food. Not bad with beer but no substitute for hot-off-the grill yakitori, which is actually cheaper than the mushy variation found in cans. This was like eating airplane food or mystery meat found in Hungry Man TV dinners circa 1977. I don’t want to knock all canned foods found in kakuuchi because some of them are quite tasty for the price. In fact there are a few popular chains like Mr Kanso that only serve canned food.

I noticed an old poster advertising sake with actor Kinya Kitaoji that looked like it dated back to the 1980s. I like how old shops often keep their favorite posters on the wall instead of replacing them each year  with new ones from their distributors, which usually feature younger and more popular stars like singer Fukuyama Masa who currently appears in ads for Asahi Super Dry. The proprietress told us that the shop was started in 1931 and has been in her family for three generations, but she joked that she will be the third and the last person in her family to run Ikenaga Saketen since nobody is going to take it over after she is gone.

We talked about the  skyrocketing number of tourists in Osaka and how all the money they spend pumps life into the economy. She said the large crowds in Umeda and Namba don’t affect her at all. The tourists never come up this way and she has no desire to experience the hustle and bustle of the big city. Our pleasant conversation was interrupted by the incoherent ramblings of the American blowhard leader giving a speech on TV.  The problems of the world have followed me to this tiny shop in the middle of nowhere. You can often escape from the crowds, but you just can’t escape from some people no matter how hard you try to get away from them. I took that as a sign it was time to leave.

I asked the proprietress of Ikenaga if there were any similar establishments in the area. She recommended Okamato Saketen (岡本酒店) a short walk down the road to EAST shotengai shopping arcade.

The first thing that I noticed upon setting foot in Okamoto Saketen was that it had a small curved counter that was attached to a glass display case. I don’t think I’ve ever seen this unusual design before, but it allowed five or six people to drink comfortable in a very small place. There was also an art deco type mirrored wall (sliding doors?) inside that would have looked great in a space age bachelor pad from the Mad Men era. We ordered a Kirin Heartland in a green bottle, which was a nice change from the usual “Big Three” daibins (Kirin Lager, Sapporo Black/Red, or Asahi Super Dry). The master, a hard working man in his 80s told us that Kirin Heartland is brewed nearby and it seems to be a source of regional pride here.

It was also a reminder that I was not in Osaka, but just across the way in Hyogo Prefecture in Amagasaki city. This is Hanshin Tiger country and there was an old decoration on the wall celebrating the Central League championship in 2005. The Tigers haven’t won the Japan Series since 1985, when a little-known ex-MLB player from Oklahoma named Randy Bass achieved godlike status by hitting 54 home runs and almost broke Sadaharu Oh’s all-time record of 55. Hanshin Tigers fans were so overjoyed by their big win that many foreigners with a beards who bore even the slightest resemblance to Randy Bass (like my friend Gary from Ireland) were rewarded with free drinks for years to come.

The owner of Okamoto calculated our tab with an antique wooden soroban, which looked like it has been around since the shop opened in 1929. I  have been in several other old  sake shops where the soroban dated back to the Meiji era and has been in use for 3-4 generations. In addition to the Heartland beer we had two dishes, spring rolls and fried chicken (karaage), which were served in round cheese boxes–a nice touch–but the bill came to less than 700 yen. Either the food is dirt cheap or we got a nice discount because it seemed like we should have paid more.  The owner did not want to be photographed but he was kind enough to offer us presents as we were leaving. I don’t remember what JYT chose but I got a small beaded piece of jewelry that could possibly be a scarf clasp.  I definitely will return to Kuise again.

It took us about ten minutes to walk from Kuise to Chibune. We were back in Osaka on an island, but I don’t remember seeing any water. “We walked over a bridge,” JYT explained as we went off in search of Deguchi Saketen. I liked the old sign, which was missing the kanji  for shop (店) and I also liked the name of the shop itself: Deguchi is a last name but it also means “exit”, which I thought was kind of interesting. Enter the Exit.  JYT had stopped by Deguchi for a drink earlier in the month to inquire about the hours. He must have made a really good impression with the 91 year old owner who has been running the place for 70 years because we were greeted like Norm walking into Cheers by the owners and a group of regulars who were in the middle of a bonnenkai year end drinking party. One of the revelers later bought us a bottle of Asahi Super Dry. I felt at home here already.

We ordered  two small bottles of Yebisu, an excellent beer brewed by Sapporo and selected a few dishes from the menu, which was handwritten on a small white board above the bar: gyoza (¥310), microwavable shrimp gratin (¥330) and canned doteyaki, (beef sinew stewed in miso and ramen,) a high end brand that was much better than the canned yakitori we had at Ikenaga.  The other items on the menu, are  chawanmushi (¥210), Spaghetti Neapolitan (¥330), daikon oroshi, grated yam (¥210), kamaboko, fish sausage (¥380), harihariyaki, thin white strips of daikon soaked in vinegar and other flavorings (¥210) and sansaiyaki, grilled mountain vegetables aka wild plants (¥380).

Osaka is home to the largest number of people from Kyushu outside the region, and they often bring dishes from their hometowns to share with customers at their local watering holes.  A woman from Kitakyushu generously offered us a homemade plate  of grilled chicken and edible chrysanthemum, Delicious! She joked that Kyushu men are famous for teishukanpaku (亭主関白), the term used to for a chauvinistic husband who bosses his wife around. A man from Kagoshima sitting next to her laughed out loud but he didn’t deny it. In the spirit of fairness and equality, the term for a wife who wears the trousers in the family and lords over her henpecked husband is kakaatenka (かかあ天下). I must remember to use it next time.

One of my favorite  books is Blue Highways by William Least Heat-Moon, a Native American who chronicled his travels through the back roads of the USA. Least Heat-Moon would often stop at roadside cafes along the way and developed a fail-proof system to determine if the food was good before ordering: He rated the cafes based on the number of calendars hanging on the walls:

No calendar: Same as an interstate pit stop.
One calendar: Preprocessed food assembled in New Jersey.
Two calendars: Only if fish trophies present.
Three calendars: Can’t miss on the farm-boy breakfasts.
Four calendars: Try the ho-made pie too.
Five calendars: Keep it under you hat, or they’ll franchise.”

I decided to apply Least Heat-Moon’s calendar-wisdom to Deguchi Saketen.  I looked around and counted: one, two, three calendars. The system works in Japan so far.

It was time to leave this wonderful old sake shop.As we were paying our bill, yet another friendly regular walked through the door with a box of mikan oranges and handed them out to all the customers. including us. That’s a nice way to say hello and goodbye. Exit Deguchi Saketen, enter night.